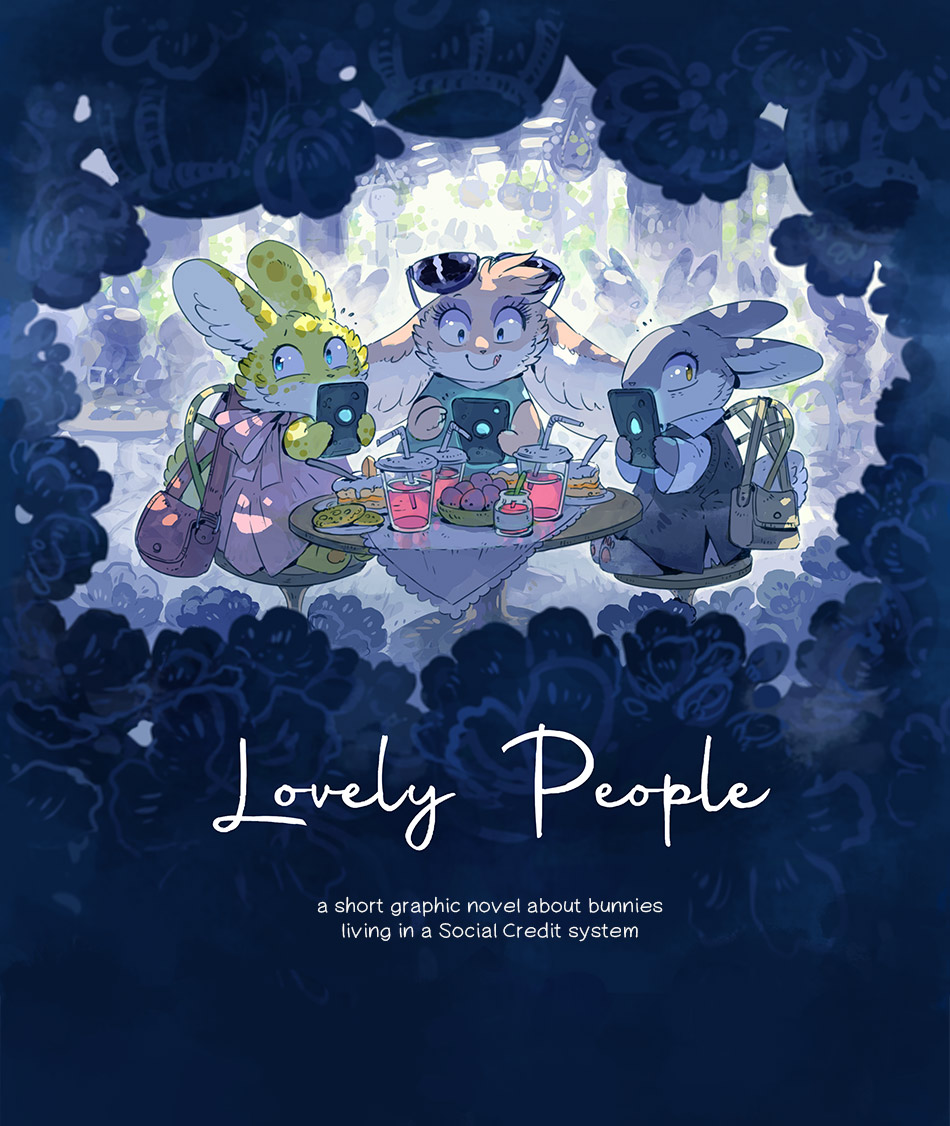 *Update MAY 6th 2021* A book version of the comic is now available! I'm self publishing for now so it's for sale here on my own little online shop. 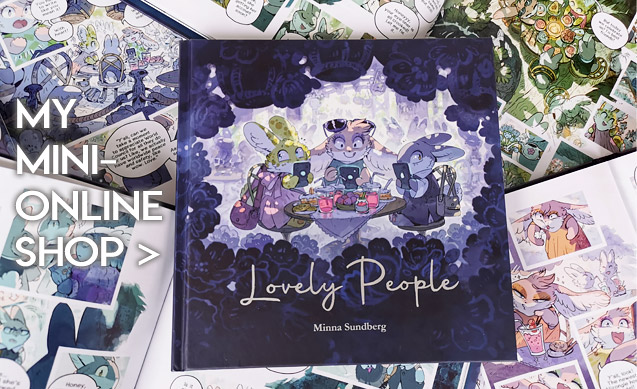 Thanks for reading my comic to the end! Hopefully you got something out of it. I wrote some paragraphs about my motivations behind making this comic, you can read them below if you're interested, but it's not necessary. The comic stands on its own as it is. Have a good day
~ Minna Sundberg, 19th March 2021

(If you want to give feedback on the comic , good or bad, you can send an email to lovelypeoplefeedback @ gmail dot com (no spaces etc ). I don't reply because I haaate writing emails, but I'll read it!)

I first learned about the concept of a digital Social credit system a couple years ago, in the context of some budding trials in China around that time. I thought I could make an interesting short comic around that subject, told through a cast of cute bunnies for some reason. But I really wasn't in a hurry to develop that idea. I thought: maybe in a decade or two if I run out of comic ideas. Also, it's not as if anything like that could possibly be implemented in the "free" world without generations of brainwashing first, so it wouldn't really be topical during my lifetime anyway, right?

Then 2020 rolled in with its pandemic, and in late summer many people (much smarter than me) started pointing out the striking similarities between the core concepts of how a Social Credit System works and the proposed (back then still "hypothetical") health passports. The proposals were of the spirit that anyone who in the future wished to travel, attend public gatherings, use trains, buses or other public transportation, would be required to join a the new Health Passport system. Some organizations were proposing it should eventually be require even to attend university, visit libraries, banks, shopping centers or hotels, possibly even every-day grocery stores. If you refused you'd simply not be allowed to participate in society. If that were to turn from a hypothetical solution into reality it'd be very easy to turn into a full-on global Social Credit System by simply re-framing that "health passport" as a general "good citizen" passport. (*Note*:As I'm writing this the hypothetical suggestions are being made reality, the European Union just recently announced their coming "Green pass". Deciding to name it vaguely the "Green pass" instead of the "Health passport" does seem to imply an intent to use it for more than just health purposes in the future years. *End note*)

So in late autumn of 2020 I finally decided I should do this comic now, rather than sometime in the distant future. I have no idea if such a technocratic dystopia is actually imminent, or 50 years away, or fails before it even gets off the ground, but I was very naive to think people in the "free" world would be resistant to its core concepts without generations of brainwashing. The only thing that's needed is fear, and people worldwide will accept anything if they think it will bring them "safety".

But then after I started working on the comic in earnest I came to ask myself: "why bother?". It's not like the world isn't full of books and movies that warn of dystopian technocracies of this sort, what is my tiny insignificant comic on that pile worth? What's the point? People do not oppose this kind of future not because they don't know about it, the truth is: for the vast majority it's not a vision of a dystopia, but a "utopia".

What's not to like? Everyone just goes with the flow of the system and enjoy an endless flow of cheap trinkets and gadgets to consume, an ever-increasing stream of free entertainment to fill every waking moment; movies and videogames and pornography and events. You can spend your Universal Basic Income on restaurants of all sorts and travel and thrilling "experiences" for pictures on social media. If somehow you still feel unfulfilled just consume a pile of self-help books that will teach you how to reach enlightenment by loving yourself more, manifesting your higher consciousness and finding the divine of your own self. If that doesn't help just smoke some weed, or seek something stronger from your doctor. You'll be content one way or another. Nobody will be around anymore to tell you about how you sin against God, to repent and humbly turn to Christ for forgiveness and salvation from the judgment that comes at the end of everyone's lives. That would be offensive, hurtful and harmful, and thus not allowed! You can say that Jesus loves you and wants you to live your best life, that's it! But... we're not there yet. The all-silencing Social Credit System is not yet here, and there's still time to sound the message of salvation.

So that's what I concluded to be my reason for making this little comic. If that technocracy is to come it will come, be it in 5 years or 50, and it will be in accordance with God's plan. For me personally I wont be harmed by it, because God already had mercy on me and pulled me to him last year. My soul is safe, no matter what's to come.

I'd been an atheist for nearly 15 years. A little over a year ago I started feeling a pull to believe in God, Jesus, and I hesitantly started calling myself a Christian. But really I wasn't, I didn't even know what Christians believe. I would pray for good things to happen to me and my family, and for peace of mind, success in my career. I read one of the gospels and didn't understand much. I never admitted my sinfulness. Life was good, my career was going well, lots of things to plan for and look forward to in the future.

But as so many other last year (2020), I was jolted out of my comfort. And through many turns God, by his providence, allowed me to understand something of how truly sinful my nature is, and how little I deserve mercy. How no amount of doing good could ever make me righteous enough to deserve being in God's presence. I'm exceedingly prideful, self-righteous, greedy, covetous. There's so much spite and envy in my heart. So much love for myself and so little for God, even if I tried to excuse myself and pretend otherwise. And most of my life I'd belittled God and sneered at biblical Christianity, while elevating myself as more enlightened and wise as a progressivism-minded Atheist. Yet despite all this God granted me the gift of belief in His existence, and then, in late autumn of 2020, repentance and forgiveness through his son Jesus Christ. I have nothing to fear.

In conclusion: If you one day find yourself in that future utopia, where your purpose of life is consuming product and entertainment or pursuing vain goals of "bettering yourself", and nobody is allowed to say or write anything "harmful" anymore , remember this: your problem is your sin against God. But He is loving and merciful, and is still gathering his lost sheep, humble yourself and repent.

"Now, brothers and sisters, about times and dates we do not need to write to you, For you know very well that the day of the Lord will come like a thief in the night. While people are saying, "Peace and safety, destruction will come on them suddenly, as labor pains on a pregnant woman, and they will not escape.

But you, brothers and sisters, are not in darkness so that this day should surprise you like a thief. You are all children of the light and children of the day. We do not belong to the night or to the darkness.

So then, let us not be like others, who are asleep, but let us be awake and sober. For those who sleep, sleep at night, and those who get drunk, get drunk at night.

But since we belong to the day, let us be sober, putting on faith and love as a breastplate, and the hope of salvation as a helmet. For God did not appoint us to suffer wrath but to receive salvation through our Lord Jesus Christ. He died for us so that, whether we are awake or asleep, we may live together with him."