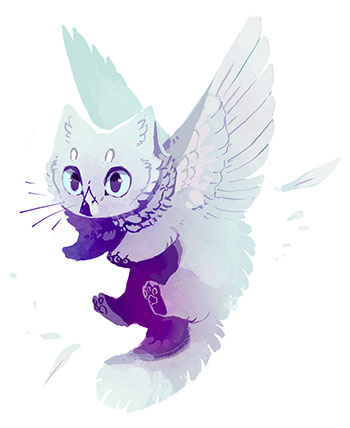 Welcome to Hummingfluff.com! This is where I (Minna Sundberg) keep a blog for recording the process of making "City of Hunger", a little rpg game. My first game ever, in fact! In case you've found your way here from somewhere else than my other works: I'm really a comic artist and graphic designer, hello! My current comic and fulltime job is "Stand Still. Stay Silent", and before that I made "A Redtail's Dream". They're both webcomics, and naturally free to read.

But one day in late 2016 I decided that I also wanted to make something a bit more interactive than just comics. Thus I set out to try and learn programming, and am now working on this in my spare time, which is weekends and Wednesdays. I hope you'll enjoy following along this fun journey of mine where I struggle to create something that's so very different from anything I've made before! I'll try to post an update every couple of weeks.

You can also follow updates on twitter: @hummingfluff. And that thing on the left there is the titular hummingfluff, mascot and grand guardian this site. Cute, eh?

"City of Hunger" will be a 2d narrative rpg with a turn-based battle system, mechanically inspired by your older final fantasy games, the Tales of-series and similar classical rpg's. The story will be set in a futuristic world on a faraway icy planet.

Gameplay-wise there'll be a strong focus on the story and develping the characters in a choose-your-own-adventure or visual novel-like fashion, but also a peculiar world to explore and rogue humans, mechanoids and mysterious alien beings to fight.

The main characters are the same as in "Stand Still. Stay Silent", but the setting and plot are completely different. It's a bit of an alternate universe story, with extra potency on the "alternate" part. No prior knowledge of the SSSS story or characters will be required to enjoy the "City of Hunger" story to its fullest, those who already know and love the characters from before will just be able to enjoy a different take on their lives and fates.

I'll make this section more in depth and nicer with screenshots and whatnot in the future, once the development has progressed a bit more. It's far too early for me to show off any cool specifics yet, but that's at least an outline of what's planned!